“…doves and lilies, and velvet…” Translating Self-Translation with Remarks on Synaesthesia and Bilingualism (The Case of Nabokov) 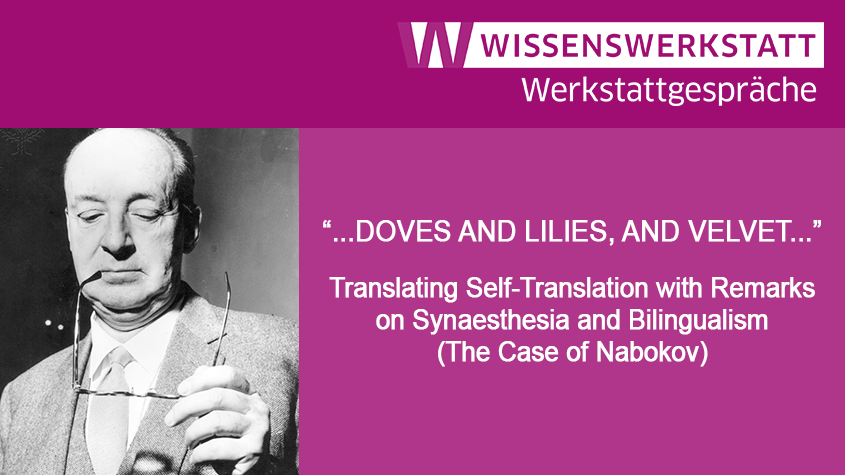 From the point of view of translation studies Nabokov’s case is very apt to shed light on some new aspects of practical and theoretical problems of literary translation. First of them is that the fact of self-translation result two original versions representing a double authenticity.
The lecture will also challenge the notion of the minimal and maximal unity and a number of practical problems that translating Nabokov to a third language raises.

I argue that in Nabokov’s poetic prose-texts letters can generate sense by their graphic exponents and obtain an independent sense developed into leitmotifs as discrete letters become bearers of sense, isolated from the words, in their independent visual appearance alone. Nabokov’s texts demand a duplex, two-way strategy of reading with a special, now gliding, now stopping eye-movement: the sense is given not (only) by the consecutive line of words, but in very “flesh of the text”. This statement will be demonstrated on some letter-motives of Nabokov’s oeuvre. I will also discuss Nabokov’s synaesthetism as linked to the perception of letters as images. “[…] the color sensation seems to be produced by the very act of my orally forming a given letter while I imagine its outline…”—writes Nabokov in his Speak, Memory.

The interference of sense of taste and the visual activity of mind, originated in Nabokov’s synesthetic capacities developed due to his multilingualism, and complemented by many biographical circumstances merge in Nabokov’s special concept or philosophy of the language. This unique complex has a close correlation both with Russian Symbolist and Avant-garde experiments in language otherwise usually regarded in opposition.