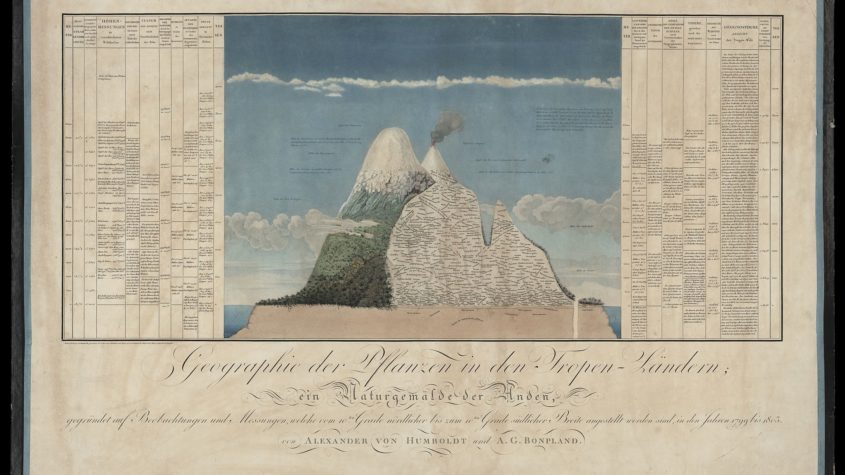 The Prussian naturalist Alexander von Humboldt has long been celebrated for his representations of mountains. The most recognizable among them is the “Tableau physique des Andes” (or “Naturgemälde der Anden”), which depicts the botanical geography of the Ecuadorian Volcano Mt. Chimborazo (Fig. 1). But mountains were only part of the picture – or rather, the Naturgemälde (literally meaning “nature-painting”). Humboldt’s life was framed by two other vertical discoveries: that of the subterranean, around the time of his birth in 1769, and that of the submarine, in the decades preceding his death in 1859. These were not discoveries in any traditional scientific sense (e.g. the discovery of a new species or planet) but in a broader conceptual sense – discoveries of natural spaces as destinations and objects of study. Humboldt acted as a red thread between them, linking mines, mountains, and oceans.

Humboldt’s early life was marked by both an intellectual and a professional interest in the subterranean. He attended the Bergakademie in Freiberg and served as a mining official in Franconia in a time of unprecedented mobility through the cavernous underground. Beginning in the 1760s, a new wave of literature arose in which mines and caves were described by and for travellers. Franz Ludwig Cancrin, for instance, wrote his Beschreibung der vorzüglichsten Bergwerke  (1767) “in order to give dilettantes and travellers a taste of the mines” before venturing down themselves. Later, in 1793, Wilhelm Heinrich Wackenroder described the aim of his travels as “coming to know Nature over and under the earth.” Those with an eye for natural history, like Goethe, observed how geognostic phenomena “expose themselves as much through nature as through the hands of men.” Humboldt himself laid “the groundwork for a subterraneous meteorology” after discovering in the mines “the most exquisite fungi and lichen…and an entire subterraneous Creation of animals [Thierschöpfung].” At the same time, he partook in a flourishing visual culture in which mining officials and surveyors sought to depict mines, dams, land plots, geological layers, and technical apparatuses from vertical perspectives (Fig. 2). 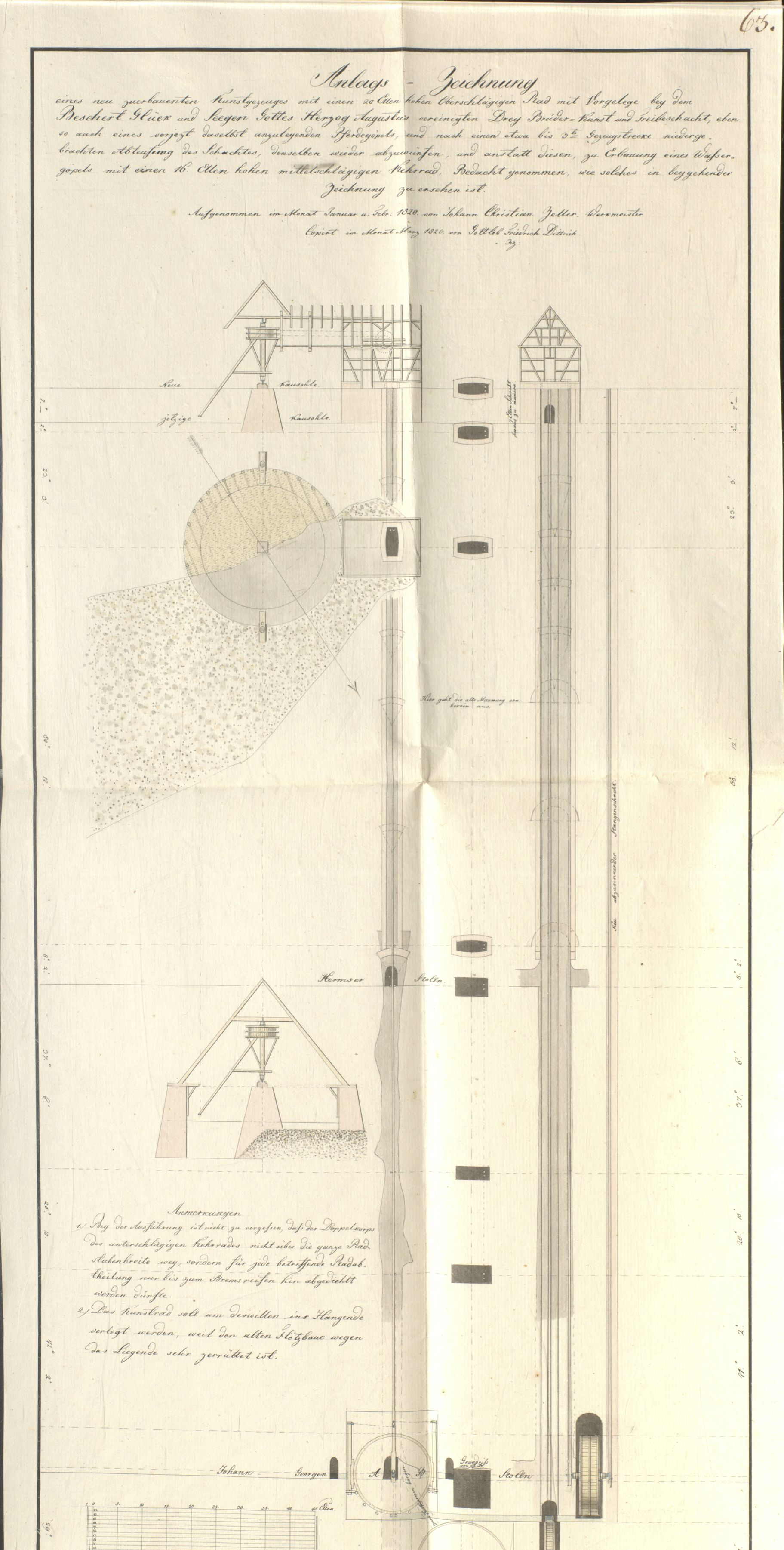 What the late eighteenth century had been for the subterranean, the mid-nineteenth century was for the ocean. This was particularly true in England and America, but also to a lesser extent in German lands. Above the waves, as Helen Rozwadowski and Michael Reidy have written, “the ocean transformed from highway to destination.” Below them, oceanographers like Matthew Fontaine Maury (Director of the U.S. Naval Observatory) believed their sounding leads had revealed a “telegraphic plateau” where a cable might be laid to connect the Old and New Continents. From Berlin in 1856, Humboldt read in the National Intelligencer  that the bottom of the Atlantic had been “found of down-like softness” over which “our beautiful ocean river glides along…as gently as the current of time.” Moreover, even the deepest parts of the ocean were found to contain a variety of “life-forms [Lebensformen].” As Humboldt’s protégé Christian Gottfried Ehrenberg proclaimed before the Königliche Akademie der Wissenschaften in 1856, “animal life…lifted 16,200 feet out of the depths” now made it impossible “to take the form-rich ocean bed for dead” (Fig. 3). 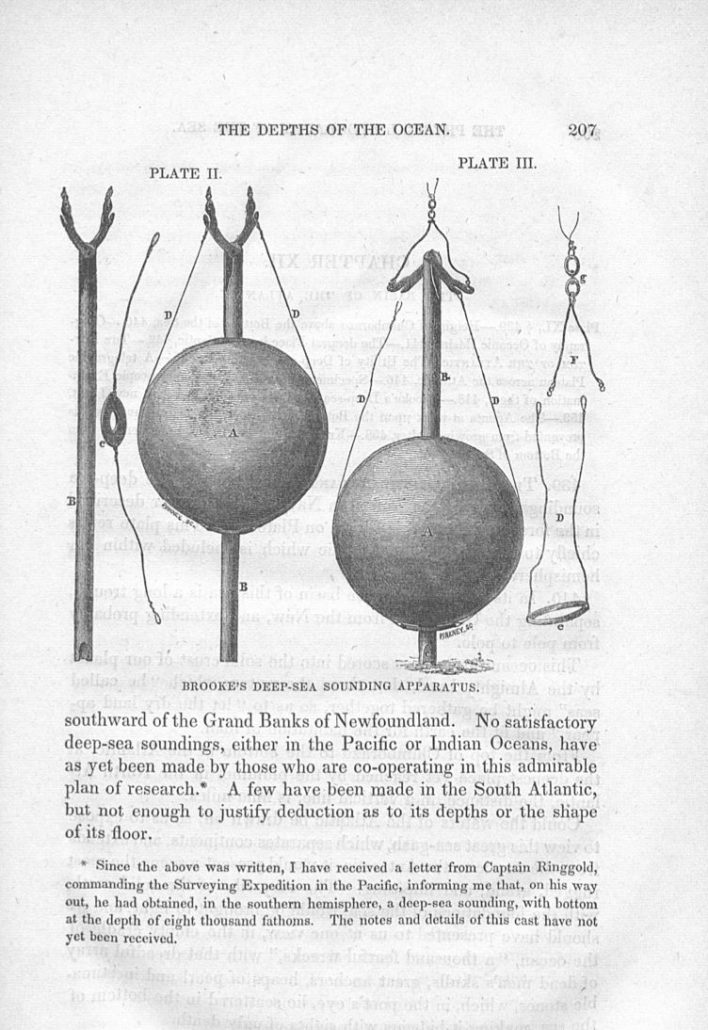 Evidence suggests that Humboldt and his contemporaries also conceptualized the subterranean and the submarine in similar ways, employing mountains as measuring rods with which to imagine spaces hidden beneath the surface of the earth and its oceans. In Kosmos,  for example, Humboldt calculated “a vertical distance of about 48,000 feet…from the highest pinnacles of the Himalayas to the lowest basins containing the vegetation of an earlier world, sunk as far below the surface of the sea as Chimborazo is elevated above it.” Similarly, in the documents Humboldt kept in his “Sea and Depths” folder, we see how mountains could be used to reckon the depths of the ocean. On one note (Fig. 4) Humboldt observed how British naval officer James Clark Ross described the deepest point of the ocean as being “beneath its surface very little short of the elevation of Mount Blanc above it.” Beside this note is a letter from the Irish astronomer Edward Sabine, who in 1853 wrote to Humboldt “of a successful attempt which has been made by Captain Denham of the Royal Navy … to reach the bottom of the sea at a depth much exceeding that of the highest summits of the Himalaya.” Humboldt’s notes on the summits of the Himalaya illustrate the same method in reverse, now using the depths of the ocean to take stock of the heights of mountains. When in 1849 Joseph Dalton Hooker sent Humboldt the latest measurements of Tibet’s tallest peaks, the latter compared them not only with Chimborazo and Montblanc, but also with “sea soundings [by] Ross” (Fig. 5). 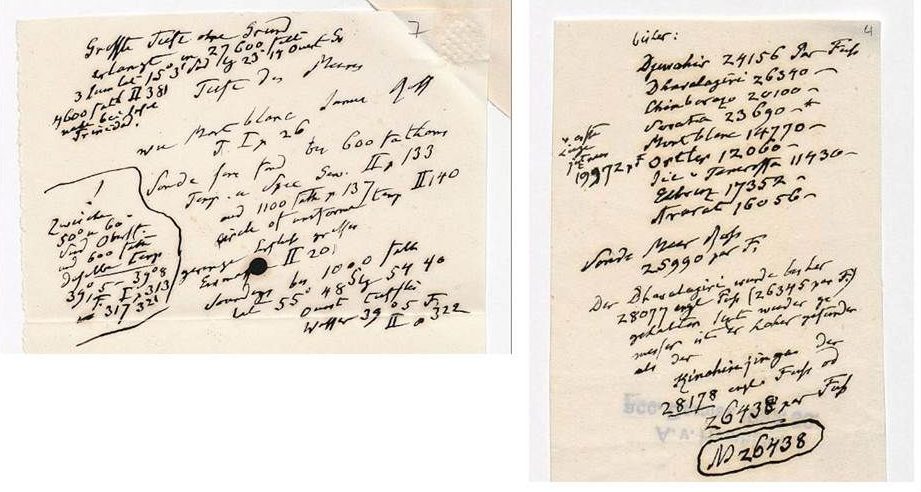 In this way, Humboldt’s Nachlass at the Staatsbibliothek zu Berlin reveals the final decades of his life as a period in which the observable world seemed to expand ever more along nature’s vertical axis. In the same years that estimations of the ocean’s deepest point descended from the 4,600 fathoms sounded by Ross to the 7,000 probed by Denham, the roof of the world grew from Chimborazo, measured by Humboldt himself at 20,100 Paris feet, to Kinchinjunga, reported by Hooker at 26,400 (Fig. 6). It was during this dynamic period that Humboldt, Ross, and Sabine had learned to use one aspect of nature to make sense of another: mountains became the means of a depth-epistemology. 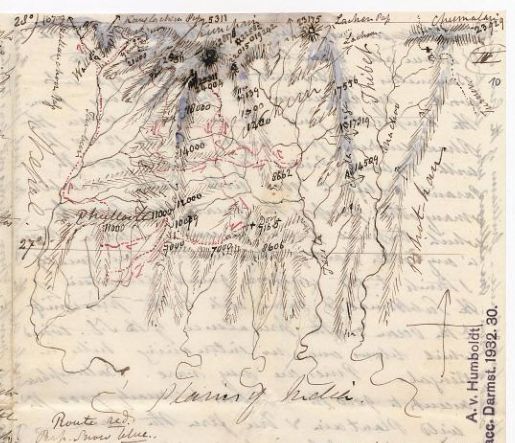 Fig. 6. Joseph Dalton Hooker’s letter of 26 April 1849 to Humboldt, containing a sketch of the Himalaya and “Plains of India.” It shows his route in red and the snow line in blue. Source: SBB-PK Nachl. Alexander von Humboldt, gr. Kasten 8, Nr. 41b, Blatt 10 r. Nutzungsbedingungen: https://creativecommons.org/licenses/by-nc-sa/3.0/de/

In a 1799 publication on “species of gas” in mines, Humboldt proclaimed “Nature knows no over- and underground.” His aim was not to dissolve the barrier between the terrestrial and the subterrestrial, but to acknowledge the equal significance of scientific inquiry in both realms. In 1853, he made a related conceptual maneuver while communicating Sabine’s letter to the Königliche Akademie – or rather, while assimilating Denham’s soundings into an interpretive framework animated by his quest for a totalizing “physical description of the earth.” After reporting that the ocean’s deepest point was beyond earth’s tallest measuring rod—“nearly 17,000 Paris feet greater than the heights of Kintschinjunga”—Humboldt argued that “only once we view the earth like the moon, without its liquid shroud, will the mountain-masses and peaks, indeed the entire surface of the earth, appear in their true form.” By acknowledging the equal significance of geography above and below the surface of the sea, Humboldt’s conception of islands as the peaks of submerged mountains had taken on a global significance. 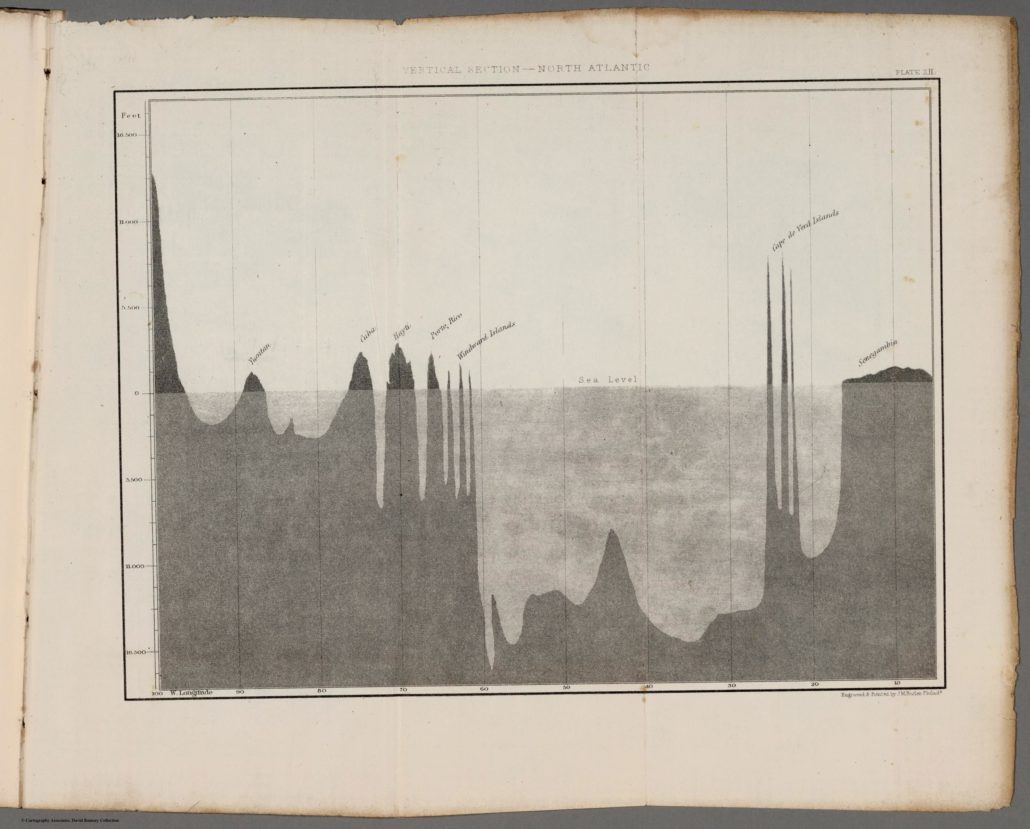 Humboldt’s historical legacy is bound to that of Mt. Chimborazo, and rightly so. Matthew Fontaine Maury, who self-consciously used Humboldt’s phrase in the title of his book Physical Geography of the Sea (1855), also took part in the Chimborazo legacy while introducing his vertical profile-map of the North Atlantic (Fig. 7). “From the top of Chimborazo to the bottom of the Atlantic,” Maury wrote, “the distance in a straight line, is nine miles.” Four years earlier, in 1851, Maury had written to Humboldt about his plans “to present a vertical section of the Atlantic basin and compare it with a vertical section of this continent between the same parallels.” Maury’s nature, too, knew no over and under. And if in 1809 Humboldt wrote of his endeavor “to represent whole countries after a method, which until now has only been applied in mining and canal projects” – that is, by depicting landscapes from aerial and vertical perspectives (Fig. 8) – Maury now represented whole oceans as such. 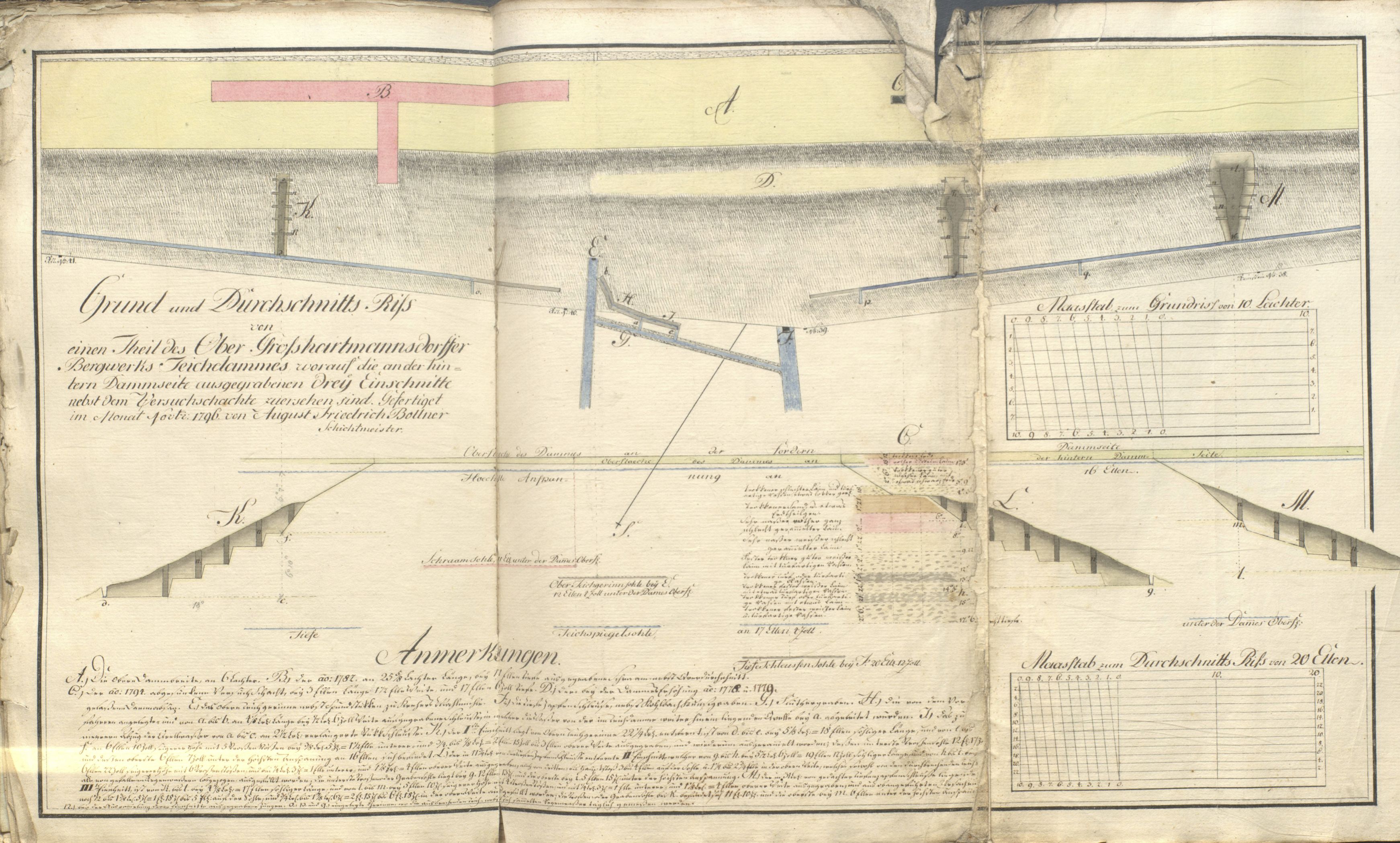 Humboldt and Maury were respectively interested in extracting metal ore from the depths of the earth and laying telegraphic cables along those of the ocean. But metals—in their ore and cable forms – were not the only things circulating above and below nature’s horizontal axis. Humboldt yielded from the mines a way of thinking about, describing, and representing nature that Maury transposed into the sea. It is fitting, then, that perhaps the most apt verses to describe this way of thinking are found on the bell in St. Peter’s Tower in Freiberg, whose tolling once sounded the daily rhythm of the miners:

so dencket in die Höh.

How true indeed this rings for Humboldt and the vertical thinkers of his time. 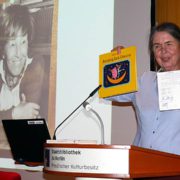 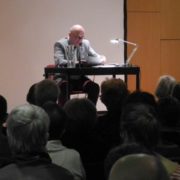 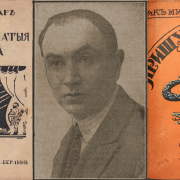 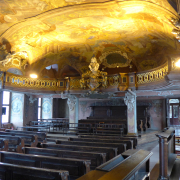 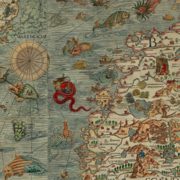 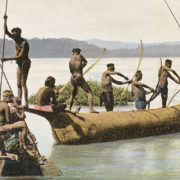 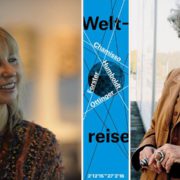