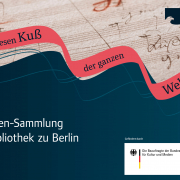 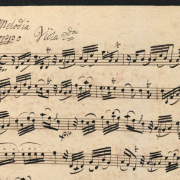 The recovery and restitution of over 5,000 music manuscripts that form the archive of the Sing-Akademie zu Berlin (siglum D‑Bsa) has had a significant impact on music scholarship by providing a wealth of newly available sources and facilitating the identification of previously unknown works and composers. Having been missing for over half a century since its disappearance during World War II, the collection was discovered in Kiev in 1999 by a team of Harvard University scholars including musicologist Professor Christoph Wolff, and returned home to Berlin shortly after. Now a permanent deposit of the Staatsbibliothek zu Berlin – Preußischer Kulturbesitz, this manuscript collection contains a treasure trove of musical works that are yet to be studied, published or recorded.

As a performer-scholar specialising in historically informed performance practices, I embarked on a two-month research residency at the Staatsbibliothek in May of 2019 to study and prepare first edition modern performance material of thirty carefully selected musical works within the collection’s holdings.

The Sing-Akademie zu Berlin, one of Europe’s oldest continuing choral societies, was founded in 1791 by Carl Jacob Christian Fasch (1736‑1800). Fasch’s student Carl Friedrich Zelter (1758‑1832), composer and passionate music collector, became musical director of the Sing-Akademie following Fasch’s death. A highly influential figure in the musical life of early nineteenth-century Berlin, Zelter contributed to and developed the vast collection of manuscripts that make up the Sing-Akademie collection. Many of the collection’s manuscript copies were made by Zelter himself, but the majority were sourced, gifted or purchased. As a result of this fervent amassing of copies, Zelter soon became something of a celebrity collector. In its current form, the collection is made up of autograph manuscripts and eighteenth- and nineteenth-century manuscript copies of predominantly German and Italian music from the eighteenth century, representing a variety of vocal and instrumental genres, as well as of a large number of prints. 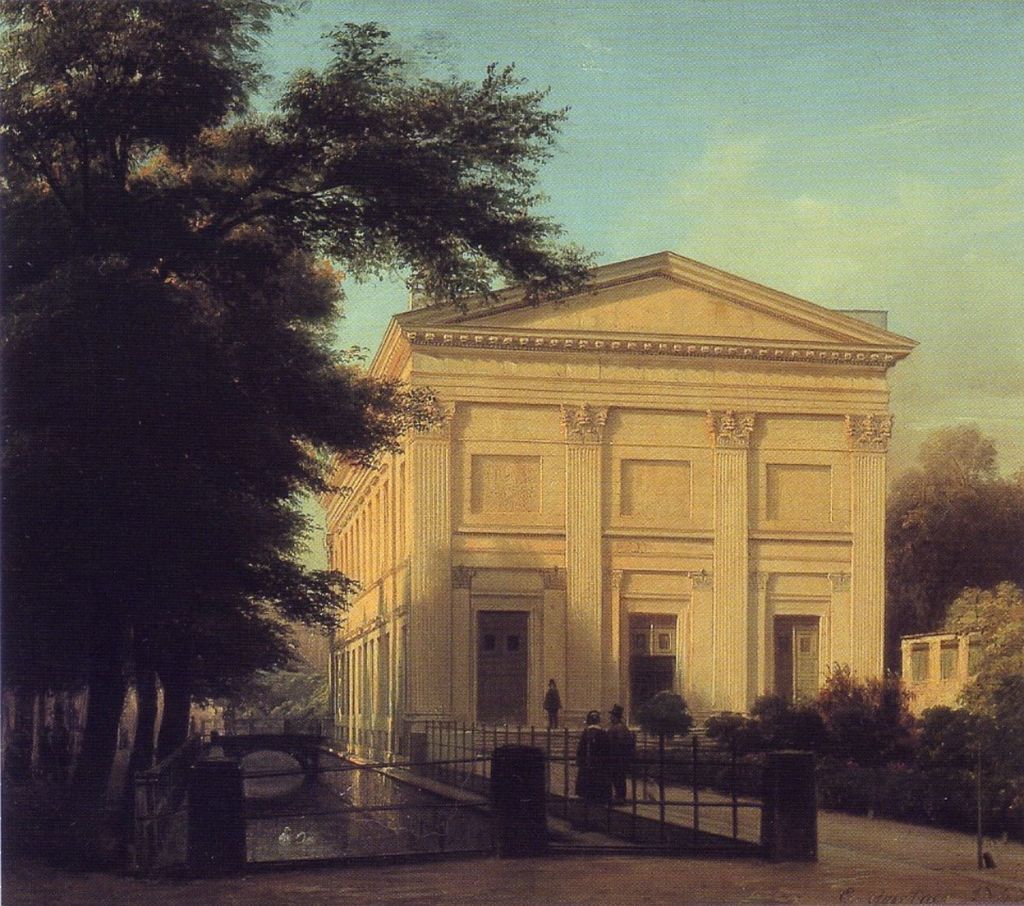 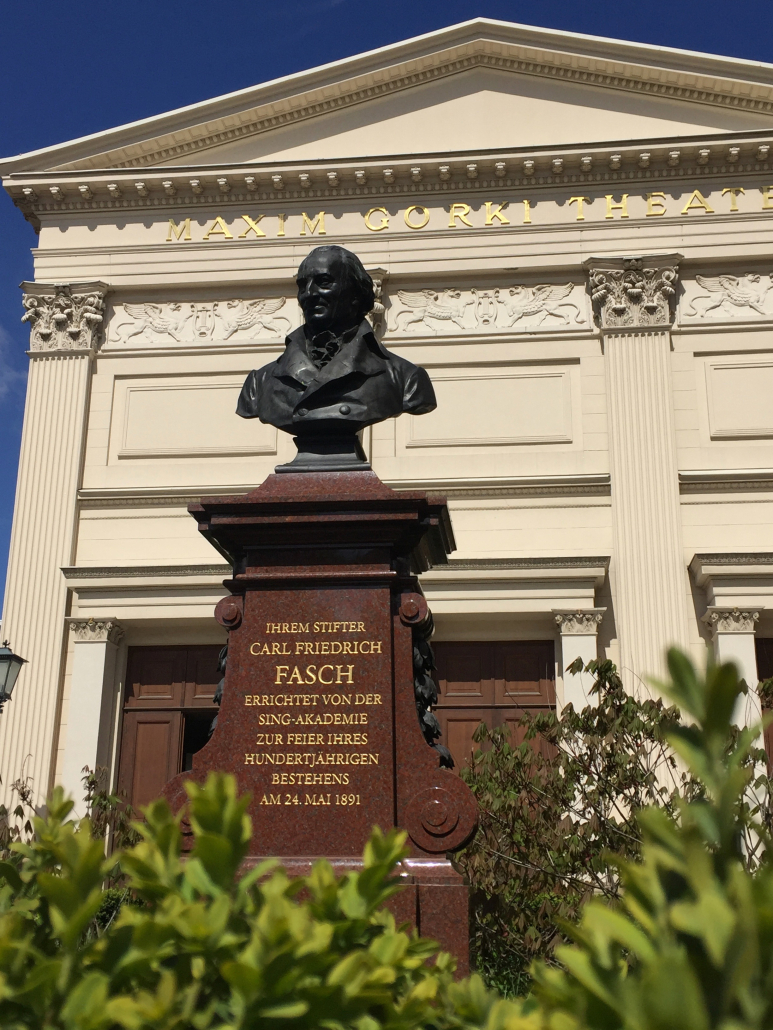 At the commencement of my residency in the Haus Unter den Linden music reading room, materials were gathered via scans from microfilm of each of the thirty works I’d previously identified and selected. This was completed in consultation with the first comprehensive index of the Sing-Akademie collection compiled by Axel Fischer and Matthias Kornemann, which was published in 2009, as well as the database Répertoire International des Sources Musicales.

Access to these scans on my laptop enabled work to begin on the editing of modern critical performing editions using Sibelius musical notation software. Each comprise full score, performance parts, introductory preface material and critical notes. This time consuming process was completed both onsite at the Staatsbibliothek and while working from home, allowing access to my instrument (the baroque bassoon) to cross check musical phrases and specific details such as articulation and ambiguous markings. Once first drafts of each edition were complete, time was spent consulting each of the source manuscripts at the Staatsbibliotek to resolve questions concerning details not evident using the scans alone. Exploring each manuscript’s provenance, authorship, copyists and possessors, dates of creation/composition, genre and style, proved to be an important foundational step within this research project. 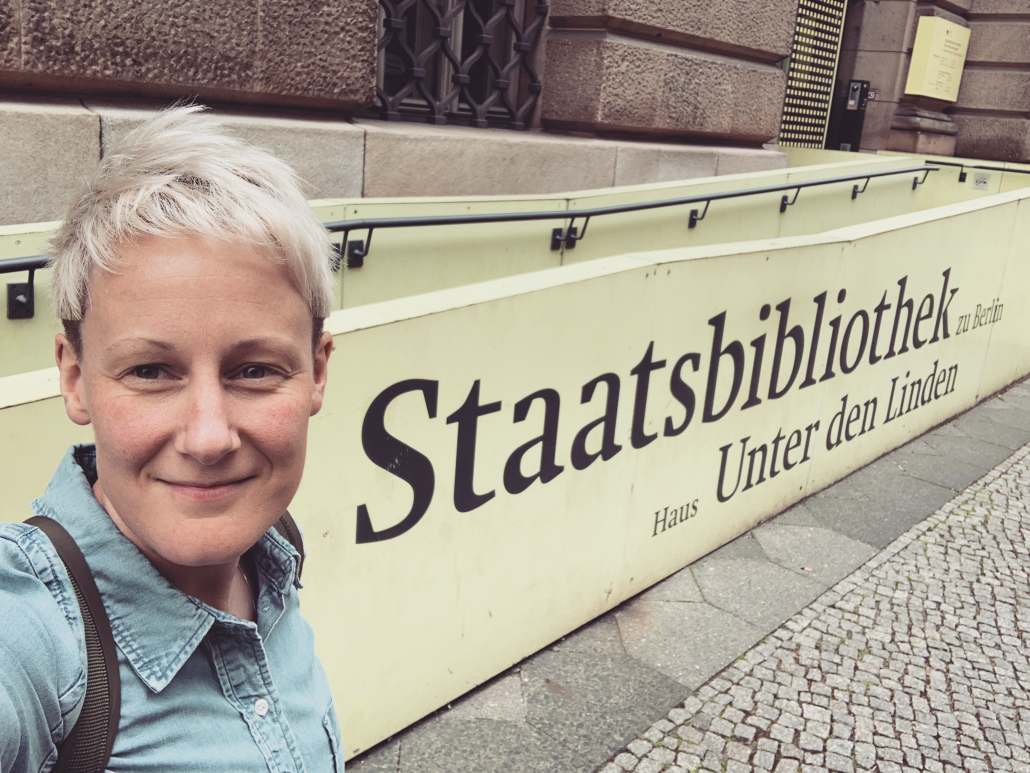 Upon arriving at the Staatsbibliothek on the first day of my residency. – Photo: S. Walters

The thirty selected items from D‑Bsa feature works by prominent eighteenth-century Berlin composers including Trio sonatas by Christoph Schaffrath (1709‑1763), Christian Gottfried Krause (1719‑1770), the brothers Carl Heinrich (1704‑1759) and Johann Gottlieb Graun (1703‑1771) and Johann Christian Roellig (b. 1716), Partitas and Divertimenti for various instrumental combinations by C. G. Krause and J. C. Roellig, as well as three symphonies by Krause. A Quartet in B‑flat major for two oboes/violins, bassoon and obbligato harpsichord composed in 1773 by Johann Friedrich Reichardt (1752‑1814) is not part of D‑Bsa but held by Staatsbibliothek zu Berlin at Mus.ms.autogr. Reichardt, J. F. 27 . This manuscript can be accessed and downloaded here as part of the Staatsbibliothek’s online digitization project.

A highlight of the project was the discovery of two unique Trio Sonatas by Christoph Schaffrath: the Trio in B-flat for oboe, violin and continuo CSWV Em:21 (D‑Bsa SA 3823) and the Trio in g minor for flute, violin and bassoon/bass CSWV Em:23 (D‑Bsa SA 3820). These Trios provide a welcome addition to the chamber music by Schaffrath available to us and share many stylistic concordances with the Trio in B‑flat for violin, obbligato bassoon and continuo CSWV E:20 (the autograph manuscript of which is part of the Amalien‑Bibliothek: D‑B Am.B 495/III). Schaffrath served for many years as harpsichordist in Berlin at the Court of Crown Prince Frederick the Great, then later as musician to his sister Anna Amalia. Although his main focus was on keyboard music, Schaffrath’s compositional output also contains a vast range of chamber and orchestral music including overtures, quartets, trios, symphonies, as well as duets for various solo instruments and obbligato harpsichord. Schaffrath’s style is contrapuntally sophisticated, while at the same time displaying the ‘galant’ qualities characteristic of composers of this transitional era between the Baroque and Classical periods. Both Trios demonstrate a fascinating synthesis of old and new approaches and follow the traditional pattern of the trio sonata, the order of movements in this instance adhere to the taste of the time (moderate, fast, fast), each displaying playful imitation between the solo instruments. 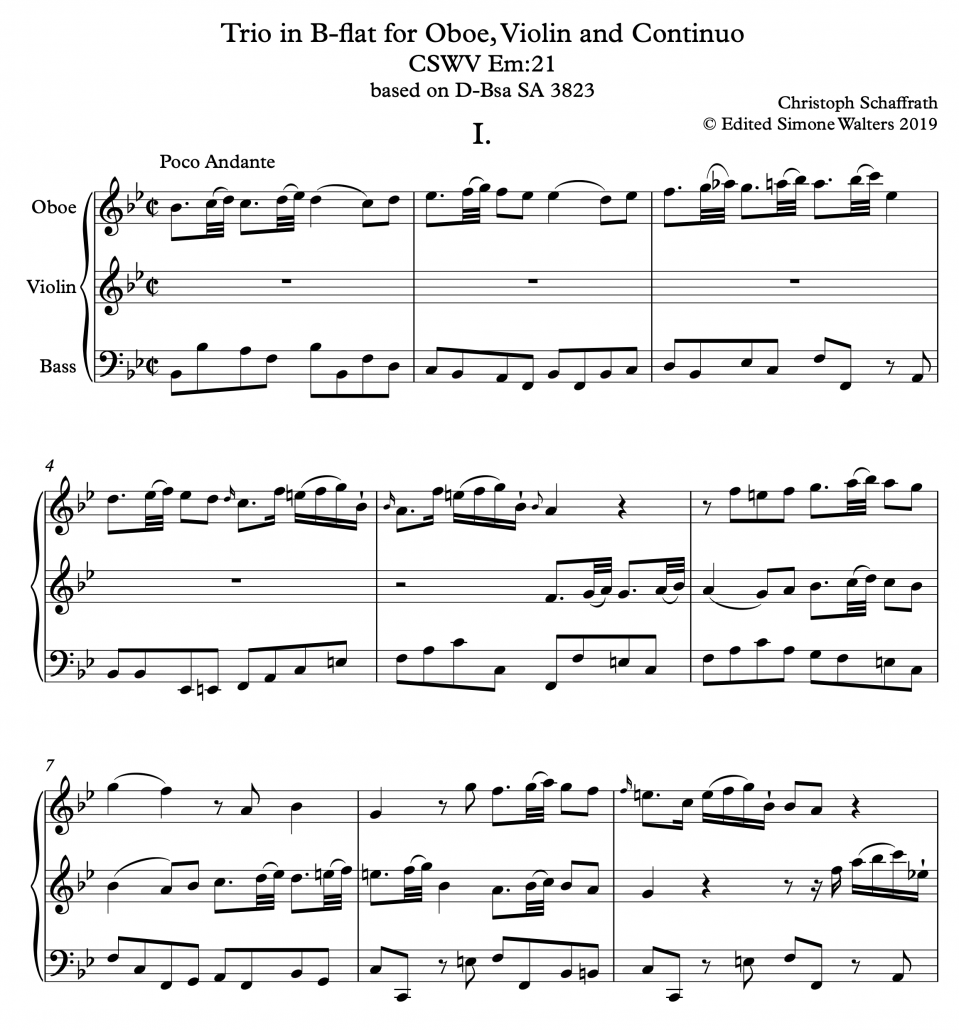 Example of opening bars of the Trio in B‑flat CSWV Em:21 by Christoph Schaffrath. – Edited by S. Walters 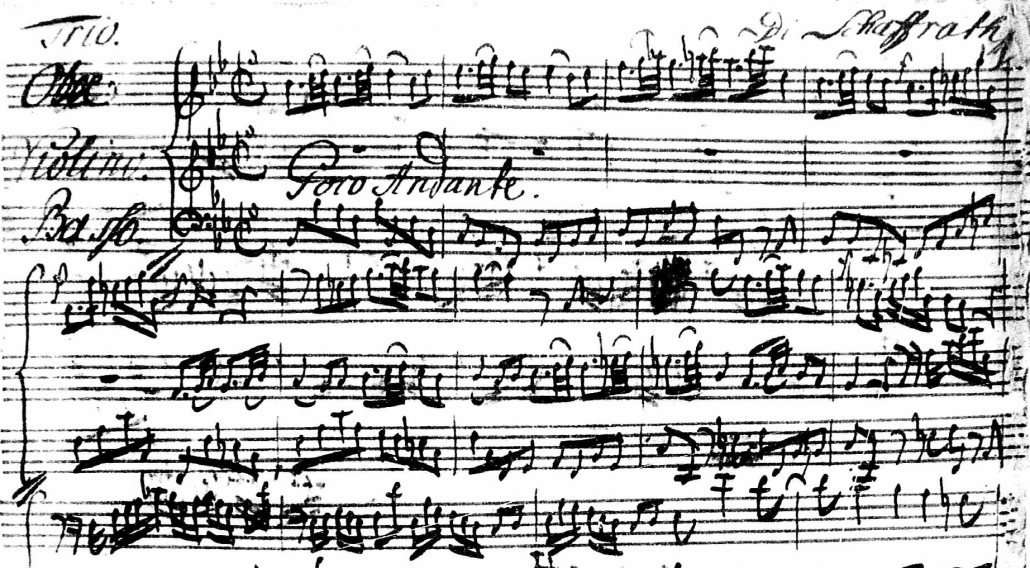 Fragment of the manuscript copy (D‑Bsa SA 3823) upon which this first edition is based. Reproduction from microfiche. – Mit freundlicher Genehmigung der Sing-Akademie zu Berlin

A surprising discovery outside of the proposed works for study was that of D-Bsa SA 3149 – an eighteenth-century arrangement of the Quartet in g minor ‘O Haupt voll Blut und Wunden’ for oboe, violin, viola and continuo by Johann Gottlieb Janitsch (1708‑1763) (Mus.ms. 11102/24). Further research led to the identification of another eighteenth-century manuscript of this work located in Herrnhut in the Unity Archives of the Moravian Church (Evangelische Brüder-Unität). Seemingly unknown to researchers and performers, this alternative source (shelfmark D‑HER Mus.E 1:15) places the quartet in the key of f minor and provides an alternative obbligato bassoon part in addition to the solo oboe. Although initially not part of the proposed research project, this was a significant and important discovery that will provide a unique and exciting addition to the bassoon chamber music repertoire and the possibility for first-known performances and recordings.

The musical works studied and edited throughout my residency at the Staatsbibliothek provide a valuable insight into the multi-faceted nature of Prussia’s vibrant musical life throughout the final decades of the eighteenth century. Publication of the critical performing editions created will facilitate the restoration of these works to their rightful place in the performance repertoire. This will enable world premiere recordings of these works as well as their likely first live performances in over 200 years.

P. K. Grimsted, “Bach is back in Berlin: The return of the Sing-Akademie Archive from Ukraine in the context of displaced cultural treasures and restitution politics.” Spoils of War: International Newsletter 8 (May 2003): 67‑104.